Great links I hit over the weekend:

Are You Jumping the Shark?

I’ve heard about the site JumptheShark.com for a few years now. You probably have, too. It highlights TV shows that have “jumped the shark.” In other words, shows that have sold out, gotten gimmicky and lost their original focus that made them great to begin with. A good example would be when Leonardo DiCaprio became a permanent member of Growing Pains. Or when that red-headed hick kid started showing up with Dixie Carter on Different Strokes.

It must be tempting for a TV show to jump the shark. Ratings go up for a little while, then they settle, and start to slip. So the network execs start pressuring the writers to do something different, something drastic, something shocking. I mean, you can only take so many seasons of wondering if Ross and Rachel are going to hook up for good. So the writers abandon the storyline and characters that made them successful to begin with and throw in a wild card. It often involves a kid or a pregnancy, or maybe a death, or maybe someone finds out that they’re related or something.

And it always tanks.

But TV shouldn’t be stuck with this. Businesses jump the shark all the time. You launch an idea, build a company around it, and you watch it meet rave reviews and huge consumer acceptance. For a little while. Then it starts slacking, and sales dip, and layoffs are inevitable, and execs are fired, and the questioning and doubt begins.

Most business jump the shark. Believing that the product that once was so successful could never be the problem, the execs demand a solution outside the realm of nurturing your niche. You look for ways to expand your brand, or gimmicks and promotions to increase trial, or endorsements, or excessive advertising, or making a pink version that appeals to women. Whatever. A company starts getting involved in projects and markets they have no business being a part of, they lose focus, and rather than focus more, they gimmick wide.

And about 2 years later (or less), you realize you have no idea what you’re doing, where you’re at, how you got there or where you’re going.

Because rather than riding the storm, you jumped the shark. 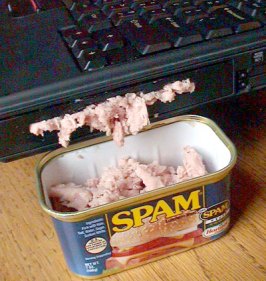 In the last month or so, I’ve seen the amount of spam coming through as comments has skyrocketed. You might’ve noticed it, too, with some that have actually momentarily tricked my blog spam filter (Akismet) and made it on the site.

What you don’t see is that I’m probably getting about 50 spam comments a day that never go live.

I’m no fan of spam. Who is? But it does beg the question: is an increase in spam mean you’ve somehow been identified as a better medium? Is being spam-worthy something to be proud of?

It also makes you realize that the more successful you become in a business, or in life, the more “spam” you have to deal with, whether it’s a lousy salesman who just knows his product is what you’ve been missing, to a long lost cousin who’s begging you for a job. Or maybe it’s more telemarketers, or more people not acting normal around you, or more meaningless meetings than meaningful ones.

And they all keep you from spending more time on what you’re good at.

If you could have a spam filter on your life, what would it filter out? Why don’t you just go ahead and filter it instead?